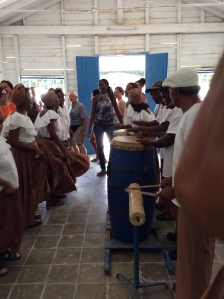 Next day
Today we were out of here early and heard a talk about Benny More, the number one singer in Cuba during the 40s and 50’s. He invented the Cuban Jazz orchestra and was influenced by the big bands of the forties and added the Latin vibe to it. He died, sadly, at 47 of cirrhosis. His funeral was like that of Edith Piaf. We went to his museum and grave. It is probable that Ricky Ricardo and his band was influenced by him.
In this same town, we went to the temple of an African religion that still remains in this town, danced in circles and got cleansed. We donated a gifts to this small poor town as a goodwill gesture.
There are so many artists in Cuba, visual and musical too, who display and play locally. Cienfuegos is a cultural center and has a small town feel.
Dancing lessons tonight. Hot Cuba nights!! I was having too much fun to get pics tonight. I spent the rest of the time fanning myself to get cool.

One thought on “Another day”