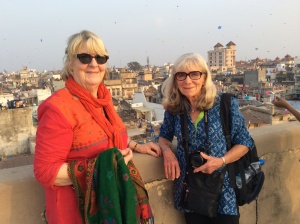 Kite Day is a national holiday. in Gujarat. Everything is closed. The holiday is like Fourth Of July times ten.

First thing we did was take a walking tour of the old city. We saw the old walls and tried to imagine when the royalty was there, with royal processions with elephants, magnificent gardens, royal costumes and textiles, flourishing businesses. It was a grand time, the 17th century in India.

At the end of the tour, a traditional lunch for kite day. It is a day where people wish each ther sweetness, so they serve many sweets and they give to the poor.

approached, we went up on a roof of Jalpa’s friends and watched the festivities. Kites flying from all the roofs as far as we could see. It was amazing. As it got dark everybody sent up lighted paper balloons. Ther 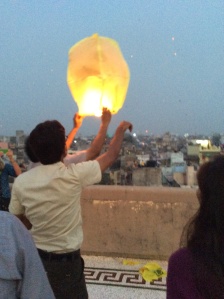 e was dancing and music on the roofs too. I even tried learning a traditional Indian dance. It was a sight I’m not likely to see again. 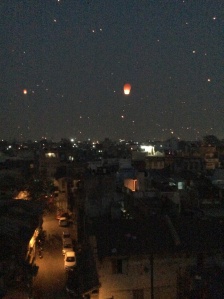 Tomorrow we will be on the road to Bhuj and stopping for one night at a hotel with no internet. No blog for a couple of days.